Yes - that was a spelling mistake, but it was done on purpose. Let's talk about your feet!

You probably use them every day. They're the first and last point of contact with the ground. They affect and are affected by every movement you do, whether during exercise or daily life. Sometimes they smell, sometimes they hurt and sometimes they just want some attention. They disgust some people, whilst others are totally enamored with them. But they're always there and a part of everything that you do especially in the gym. Yes - even when you are doing a push-up, lat pull down or a chin up they're involved.

As Ian O’Dwyer has stated many times (so much so that it's been indoctrinated into us at PTA Global), “The smallest change makes the biggest difference”. So why does the foot impact movement and the rest of the body so much? Maybe some answers lie in its anatomy (structure).

Lets start with the skeletal system. 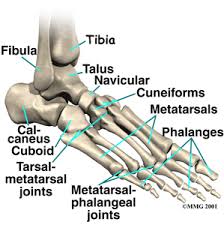 Tibia and fibula. Although not technically in the foot, these two bones are directly affected by the function of the foot and are the first point of contact with the rest of the body, so I feel it’s worth giving them a mention.

The tarsals are next and at a Cert IV level they are usually left at that. But it’s important to note that there are seven tarsals, that they articulate with each other and all have a role to play in the function of the foot. For your info, they are named: calcaneus, talus, navicular, cuboid, third (lateral) cuneiform, second (intermediate) cuneiform, first (medial) cuneiform.

After that there’s the metatarsals. Numbered one to five, medially to laterally. On the bottom of the distal end of the 1st metatarsal there are two small sesamoid bones.

To round it off, there are the phalanges. Each toe has three phalanges with the exception of the great (or big) toe. It only has two. Do you as a PT need to remember the name of every bone of the foot at all times? I would say no. But the big take away here is that there are 26 bones (that’s about ¼ of the bones in your body), that articulate at 33 places (joints). If there is an issue at one of those articulations then that may cause issues for the whole body. 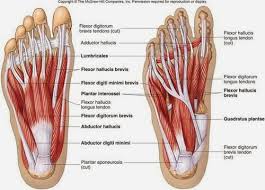 That’s a lot of bones and joints. What muscles control them? Well- there’s over 20. And if you combine all the connective tissue structures together, there are over 100 structures that attach to or in the foot! The muscles themselves are in two categories, extrinsic and intrinsic. Extrinsic muscles originate from areas above the foot and intrinsic muscles originate and insert within the foot itself. The plantar surface of these are grouped in four layers.

Now let's think about all the tendons and ligaments that would be associated with all of those bones and muscles! That’s a huge amount of connective tissue. What’s important to remember here is that all of this connective tissue (muscles, ligaments, tendons and fascial layers) are highly innervated and have numerous proprioceptive sensors located in them. Thus making the foot one of the most highly proprioceptive areas of the body.

To help understand the physiology (function) of the foot, it would be important to look at all of the connective tissue and bones combined. This will help you understand how the foot spreads its work throughout the rest of the body. Probably one of the best ways to do that is through the Anatomy Trains 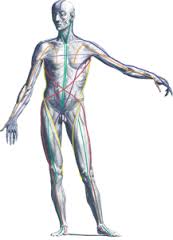 descriptions from Thomas Myers. (Whenever we look at the Myers Anatomy Trains it is important to remember the term Tensegrity and the fact that all of the Anatomy Trains Lines, affect and are affected by each other). Of the 12 discovered (so far) five of the lines run directly through the foot. That’s nearly half of all the ways the body mitigates force longitudinally affected by the foot!

The foot's multiple bones, muscles, tendons, ligaments and fascial layers allow it to play numerous roles when we move. For example, the toes can flex, extend, ab and ad-duct. From the ankle, the foot can dorsi and plantar flex. And then there is the ability for the tarsals to invert and evert. All of these joint movements also need a point of mobility and a point of stability. To quote : “As a result of the foot supinating (supination of the foot is a combination of inward rotation at the ankle, adduction of the hindfoot, inversion of the forefoot, and medial arch elevation), during the mid-stance propulsive periods, the foot is converted from a “mobile adaptor” (which it is during the contact period) to a “rigid lever” as the midtarsal joint locks in supination. By having the foot function as a “rigid lever’ (as a result of a locked midtarsal joint) during the time immediately preceding toe-off, the weight of the body is propelled more efficiently.

If the foot over-pronates (the opposite to supernation) during mid-stance and propulsion, and is in a pronated position at toe-off, the foot acts more as a “mobile adaptor” (i.e. a relatively “loose bag of bones”), rather than a “rigid lever” in these latter stages. It would, therefore, take more muscle energy to propel the weight of the body off of such a platform and the foot remains more mobile (a “loose bag”) than it should be for propulsion”.

“Okay, okay, we get it, the foot is important”! I hear you saying.

How does all of that geeky stuff help you help yourself and your clients? Well, hopefully, this blog will start to impress on you the importance of viewing the foot when your clients are moving. (Please do not miss the forest for the trees here; yes the foot is important but it is not the only structure that needs your observation). This may be difficult with shoes on, but being aware of where the foot is facing, what the arch of the foot is doing and range of motion at the ankle may give you an indication as to why some of your clients may be having trouble performing some movement patterns. For example - in a sitting or squat pattern, the knees going into a valgus deformation could very well be due to either the position (at that time) of the foot or some form of arch collapse. Whilst obviously these aren’t the only things that could be the issue here, it is a common one that occurs when people exercise. When you're training clients, be aware of where a foot or feet are facing - changing this tiny detail changes the way the whole body deals with the movement pattern. Understanding the importance of the foot could help you avoid injury for yourself or your clients. 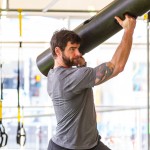