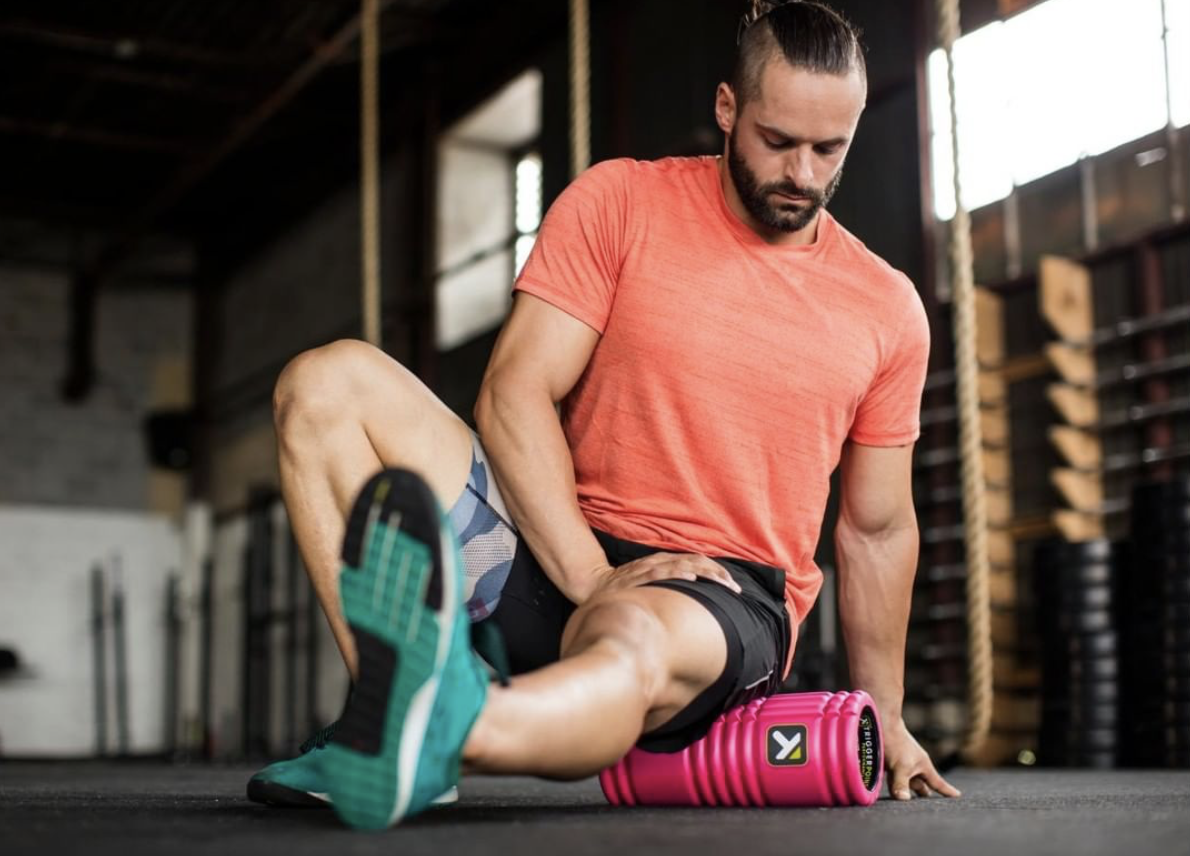 Myofascial Release of the Adductor Magnus and the Bicep Femoris

Using TriggerPoint’s Grid roller, this myofascial technique is intended to address release in two structures of the upper leg related to impaired or inhibited glute movement.

The adductor magnus is a large, triangular muscle on the medial side of the thigh which can become stressed when someone is recovering from an injury or other condition that restricted the full normal movement of the glutes. Likewise, the biceps femoris can become strained or stressed, and this can impact the rotation of the foot, knee, and hip.

First, to release the adductor magnus, set the TriggerPoint Grid roller on a bench, chair, or table. Next, sit with the back of the thigh resting over the Grid as if to target the hamstring. Before rolling the thigh over the Grid roller, the foot should be planted and the roller should be “rotated into,” as the leg rotates in the hip socket and rolls over the Grid. If any spots or positions are particularly tender, hold the position for thirty seconds while taking slow, deep breaths. Slowly roll the thigh over the Grid using the rotating motion for a total of five repetitions.

Next, to apply cross friction and lateral motion to the adductor magnus, apply pressure to the top of the thigh, and continue to rotate the leg over the Grid foam roller so that the pelvis is fully engaged and rotating with the leg. Again, slowly roll the leg over the Grid in this manner for a total of five times.

In order to access the short head of the biceps femoris, position the Grid roller under the thigh above the knee. Placing pressure on the top of the thigh, rotate the lower leg in toward the centerline of the body until the biceps femoris is targeted. Holding the leg rotated in this position, extend the leg from the knee five times slowly.

Repeat each exercise two to three times as needed.

A basic recovery technique after running a marathon is to use the Grid roller in a smooth, consistent rolling motion over the muscles of the lower and upper leg. This motion will help to flush out metabolic waste that comes as a byproduct from prolonged physical exercise and builds up in the legs after marathon attempts.

Resting the weight on the hands and lifting the lower body up, raise the hips to slowly roll the Grid toward the knee at a rate of about an inch per second. If any particularly sore or tender spots are found, hold the pressure in that location for twenty to thirty seconds, then continue the rolling motion of the Grid from the ankle up to under the knee and then back down to the ankle. Repeat this procedure five times.

To treat the hamstring, place the Grid under the thigh, just above the knee. The opposing leg can be crossed over for more compression. Raising the hips, roll the body slowly forward until the Grid is even with the hips, then roll the body back. Repeat the exercise five times, then repeat with the leg rotated in, and then out, for a total of fifteen repetitions. Switch legs and repeat.

Next, place the right hip in the center of the Grid roller as if sitting on it. Extend the right leg, relaxing the glute muscles and keeping the spine in a protected, neutral position. Using the same process as in the previous exercise, roll the body down and then back up along the Grid utilizing a slow, even rolling motion. The goal is not to target any specific muscles, but to aid in the movement of fluids in any areas likely to be stressed or inflamed after running a marathon.

Personal Training Academy is pleased to be able to offer Continuing Education Credit instruction, such as our CEC Functional Training course centered around TriggerPoint’s tools to administer muscle manipulations intended to increase mobility and promote muscle elasticity. In addition to CEC courses, Personal Training Academy also offers fitness courses to help you attain your Certificate 3 & 4 in Fitness, enabling you to work all over the world as a health and fitness professional.

ASK A PERSONAL TRAINER
How long does it take to become a Personal Trainer?